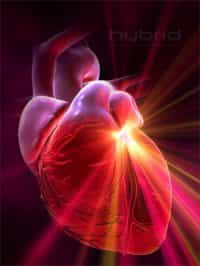 A new molecule (HBR) has been synthesized capable of regenerating the heart immediately after a heart attack and increasing the efficacy of subsequent stem cell transplantation. The revolutionary molecule is capable of immediately reducing the cardiac cell mortality produced by the infarction and inducing the formation of new coronary vessels together with the recruitment of endogenous stem cells. Furthermore, it is able to direct the differentiation into cardiomyocytes of adult stem cells in vitro to be used in subsequent transplantation. Therefore, a first injection of HBR could be followed by a transplant of autologous stem cells previously grown in the laboratory and treated ex vivo with the same molecule, thus increasing the long-term potential for cardiac repair. The study, just published in the prestigious "Journal of Biological Chemistry" – official organ of the "American Society for Biochemistry and Molecular Biology" – was coordinated by Professor Carlo Ventura, director of the Laboratory of Molecular Biology and Stem Cell Bioengineering of the National Institute of Biostructures and Biosystems (INBB), at the Cardiovascular Department of the University of Bologna and the Bioscience Institute of San Marino. The research project, a positive example of public-private partnership, was conducted in collaboration with the Bioscience Institute – Cell Factory dedicated to the expansion and autologous cryopreservation of stem cells from adipose tissue and umbilical cord – and with Dr. Vincenzo Lionetti and Professor Fabio Recchia of the Institute of Clinical Physiology of the CNR and Scuola Superiore Sant'Anna of Pisa, and Professor Gianandrea Pasquinelli of the Department of Hematology, Oncology and Clinical Pathology of the University of Bologna. The molecule synthesized by the group of researchers is a compound containing hyaluronic acid, butyric acid and retinoic acid (HBR) capable of regenerating rat hearts subjected to an experimental heart attack with an intracardiac injection of the molecule, preserving the vitality of the myocardial tissue pending the times needed for stem cell transplantation. The administration of HBR induced the formation of new coronary vessels and greatly reduced both cardiac cell mortality and the extension of the infarct scar, normalizing the metabolic structure of the myocardial tissue. The HBR molecule also caused a recruitment to the infarct area of endogenous stem cells from the bone marrow. The possibility of using the HBR molecule as a "signal of survival and cardiovascular repair" opens up new perspectives in regenerative medicine. In fact, stem cells represent a hope for the regeneration of damaged hearts that the use of the HBR molecule will help make even more concrete. The current obstacles to the use of stem cells for this pathology are the low viability of transplanted stem cells and their uncertain differentiation fate in vivo. Furthermore, the technical times necessary to multiply these cells ex vivo before transplantation determine a delay in carrying out the implantation of the stem cells even of a few weeks, when the myocardial damage due to the infarct scar, now formed, compromises the contractility of the heart. The timely intracardiac administration of the HBR molecule could serve as an immediate and lasting aid, capable of rapidly transforming the hostile environment of the ischemic tissue into a "context" more prone to the recruitment of endogenous stem cells, to be followed by an adult stem cell transplant treated in the laboratory with the same molecule. In fact, in a previous study, the same research group had demonstrated that the HBR molecule was able to orient adult stem cells in the cardiovascular direction in vitro, increasing their reparative capacity in infarcted rat hearts. [more info ]

A diet rich in fats , which provides more than 30% of the total energy value, can cause cardiovascular disease. Lipoproteins circulate in our blood, made up of numerous molecules of cholesterol and other fats, or rather lipids. These lipoproteins can be low-density LDL or high-density HDL , these acronyms will surely remind you of… END_OF_DOCUMENT_TOKEN_TO_BE_REPLACED

Fermented milks with added phytosterols are able to reduce the level of bad cholesterol by about 10% in subjects with moderate hypercholesterolemia. This is demonstrated by the first meta-analysis carried out on about 400 people which analyzed the results of 3 studies already published in the literature on the effect of a fermented milk with… END_OF_DOCUMENT_TOKEN_TO_BE_REPLACED

Just a few days ago the news came out of the death of a little girl from an allergic reaction to a simple ice cream. Unfortunately, allergies, especially food allergies, are increasing in number and often the cure is not so simple. Examples of this are intolerances and pathologies such as celiac disease. Scientists at… END_OF_DOCUMENT_TOKEN_TO_BE_REPLACED

Another surprise to come regarding the enormous abilities of skin cells. Fibroblasts , which we had already mentioned because they are capable, united with an oocyte, of generating a stem cell, now ensure a long life for young and perfect skin. Goodbye to the old scalpel and annoying botulinum injections, it is now possible to… END_OF_DOCUMENT_TOKEN_TO_BE_REPLACED

What better argument than that of stem cells to start the new year: totipotent cells have been used to treat serious liver disease. In Brazil, 15 people were chosen from those on the waiting list for liver transplantation and were – on a voluntary basis – subjected to cell therapy. "We are still in a… END_OF_DOCUMENT_TOKEN_TO_BE_REPLACED

It has been found that the use of implants made of titanium nanotubes together with stem cells can accelerate the growth of bone tissue. The group of bioengineers from the University of California – San Diego used nano-biotechnology technologies that made it possible to carry out this experiment. In fact, they were able to place… END_OF_DOCUMENT_TOKEN_TO_BE_REPLACED

Hopes from gene therapy for Parkinson's

Yesterday World Parkinson's Day was celebrated, a conference organized in the Campidoglio by the Italian Parkinsonian Association (AIP). The data reported is certainly not comforting: in Italy alone there are four hundred thousand people with Parkinson's disease, a disease that affects 3 people out of every thousand (about 1% of the over 65s) and which… END_OF_DOCUMENT_TOKEN_TO_BE_REPLACED