News on the transplant front 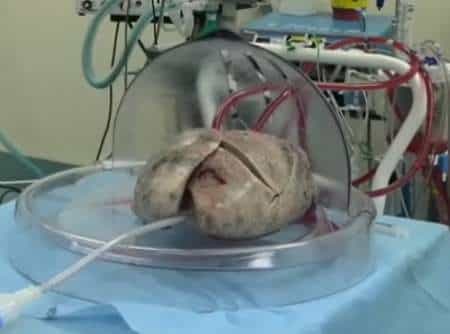 There are not many organ donors, for one reason or another it is often impossible to perform the transplant. In the specific case of lung transplantation, the situation can get complicated. The lungs are delicate organs, the only way to conserve them is to place them in an environment that is several degrees below zero, semi-freezing them, this means that the execution times of the transplant are very short and that it is necessary to act with a exceptional speed. The problem was solved by the General Hospital of Toronto , thanks to the commitment of a group of medical-researchers one day the lungs destined for transplantation will be able to keep up to a maximum of 12 hours , thus allowing the surgical team to properly evaluate the intervention and its execution. All this is possible thanks to a particular machine that is able to supply the lungs with nutrients through the blood and to keep them in a protective capsule, through a system of tubes the lung is able to breathe, its activity is more or less identical to that which he would have accomplished in normal physiological respiration. "Live" lungs kept at a temperature of 37 degrees which reproduces body temperature, but what's new in this preservation technique? The lung remains intact and does not undergo dangerous sudden changes in temperature which can inhibit some physiological functions and damage the tissues. [Source MedGadget]

A new molecule (HBR) has been synthesized capable of regenerating the heart immediately after a heart attack and increasing the efficacy of subsequent stem cell transplantation. The revolutionary molecule is capable of immediately reducing the cardiac cell mortality produced by the infarction and inducing the formation of new coronary vessels together with the recruitment of… END_OF_DOCUMENT_TOKEN_TO_BE_REPLACED

What better argument than that of stem cells to start the new year: totipotent cells have been used to treat serious liver disease. In Brazil, 15 people were chosen from those on the waiting list for liver transplantation and were – on a voluntary basis – subjected to cell therapy. "We are still in a… END_OF_DOCUMENT_TOKEN_TO_BE_REPLACED