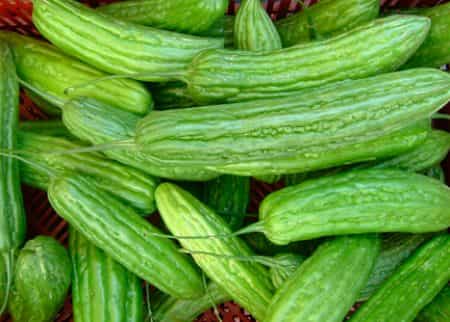 The extract of bitter melon ( Momordica charantia ), a very common vegetable in India and China, would seem able to promote the death of breast cancer cells and prevent their proliferation. This was discovered by a group of American researchers led by Ratna Ray, a professor at the Department of Pathology at the University of Saint Louis. The study, published in the journal Cancer Research , was conducted using cultures of human tumor cells which, following the addition of bitter melon extract, showed a reduced replicative capacity and increased mortality. Although the molecular targets of Momordica charantia are not yet known, it is probable that it can interfere with the various signal transduction pathways that cause cell death. In fact, an increase in caspases (proteins that induce programmed cell death, apoptosis) and a decrease in cyclins, essential for cell replication, were found in the treated tumor cells. It is therefore probable that the bitter melon also modulates the cell cycle, that is the process by which a cell divides into two. The effects of bitter melon will now have to be studied in animal models and eventually in humans. Therefore, although the results are encouraging, the research is only at the beginning. "We will have to concentrate the studies in those populations which, despite habitually consuming bitter melon, still have a high incidence of breast cancer" explained Ray who, together with his colleagues, currently conducts studies on other cell lines examining the anti- fruit proliferative From: Bitter Melon (Momordica charantia) Extract Inhibits Breast Cancer Cell Proliferation by Modulating Cell Cycle Regulatory Genes and Promotes Apoptosis Ratna B. Ray1,2, Amit Raychoudhuri1, Robert Steele1 and Pratibha Nerurkar3 Authors' Affiliations: Departments of 1 Pathology and 2 Internal Medicine, Saint Louis University, St. Louis, Missouri and 3 Laboratory of Metabolic Disorders and Alternative Medicine, University of Hawaii, Honolulu, Hawaii

Excluding skin cancers, breast cancer is, in one out of three cases, the type of cancer diagnosed in female patients. Our immune system is designed to fight cancer . T-cells in the human body belong to a group of white blood cells and play a central role in immunity. However, cancer cells cause T-cells to… END_OF_DOCUMENT_TOKEN_TO_BE_REPLACED

Early detection of breast cancer , or mammary carcinoma (malignant tumor of the glandular tissue of the breast), is possible if a woman pays attention to changes in her breasts over time. The initial stage is represented by a soft or hard lump , fixed or mobile, painful or not, which does not disappear and… END_OF_DOCUMENT_TOKEN_TO_BE_REPLACED

From skin odor to cancer diagnosis

Some English scientists have studied for a long time the correlation between the biochemical profile of a person's smell and any pathologies. The skin or rather the information given by the smells have proved useful for the diagnosis of diseases such as cancer , according to what was reported by Paul Thomas of Loughborough University… END_OF_DOCUMENT_TOKEN_TO_BE_REPLACED

An effect of spiritual well-being that lasts over a year after intake. It is caused by hallucinogenic mushrooms, used for millennia in many populations for mystical-religious purposes, but also by young and old in search of alternative experiences to hard drugs . And today the relaxing and anti-anxiety properties of these yeasts are seen in… END_OF_DOCUMENT_TOKEN_TO_BE_REPLACED

It is not weakened and destroys the most aggressive tumors of the breast and ovary: genetically modified, the virus contains an antibody capable of opening the "lock" of tumor cells, attacking them and then becoming extinct when they are exhausted. PNAS reports the success of the in vivo experimentation. The " Samson " of anti-cancer… END_OF_DOCUMENT_TOKEN_TO_BE_REPLACED

Retinoblastoma is a malignant tumor that affects the retina and occurs in children under the age of three, in a ratio of 1 in 20,000. It is a rather rare disease that leads to blindness, the causes are unknown, however it seems to have a hereditary character when it affects both eyes. The tumor manifests… END_OF_DOCUMENT_TOKEN_TO_BE_REPLACED